Shingrix Vaccine for the prevention of herpes zoster (shingles) in adults. 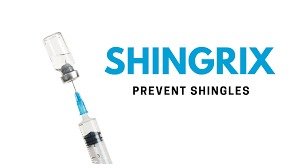 • On October 20, 2017, GlaxoSmithKline announced the FDA approval of Shingrix (zoster vaccine recombinant, adjuvanted), for the prevention of herpes zoster (shingles) in adults aged 50 years and older.

— Shingrix is not indicated for prevention of primary varicella infection (chickenpox).

• Shingles is a condition caused by the varicella zoster virus (VZV), the same virus that causes chickenpox. Nearly all older adults have VZV dormant in their nervous system, which can reactivate with advancing age.

— There are an estimated 1 million cases of shingles in the U.S. each year, and one in three Americans will develop the condition in their lifetime.

— Shingles presents as a painful, itchy rash that develops on one side of the body and can last for 2 to 4 weeks. The pain associated with shingles is often described as burning, shooting, or stabbing, and even once the rash is gone, a person can experience postherpetic neuralgia (PHN) pain, lasting from at least 3 months to several years.

• Shingrix is a non-live, recombinant subunit vaccine. It combines an antigen, glycoprotein E, and an adjuvant system, AS01B, intended to generate a strong and long-lasting immune response that can help overcome the decline in immunity as people age.

• Shingrix is administered intramuscularly in two doses (0.5 mL each) at month 0 followed by a second dose anytime between 2 to 6 months later. R

RxNews® is published by the OptumRx Clinical Services Department.

Tips to Avoid the Flu
The heart-healthy Mediterranean diet
What’s New for the 2019 - 2020 Flu Season?